Thank you to everyone who joined our 40 Years of Awesome Annual General Meeting on November 18th in person or via Zoom! 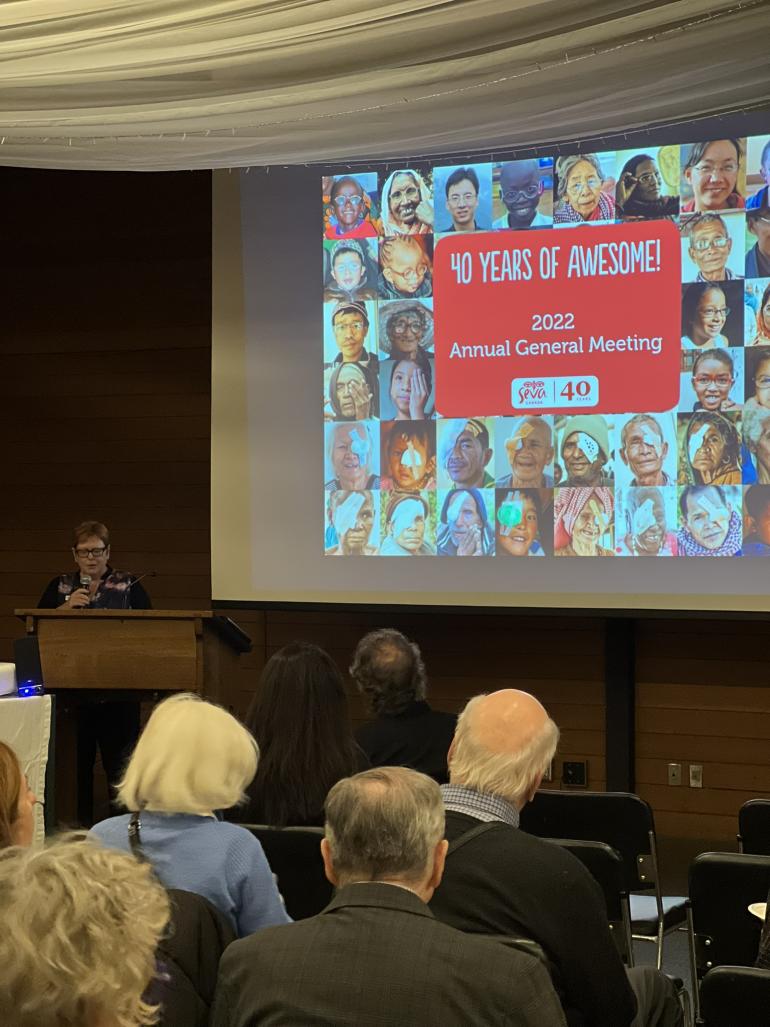 Board Co-chair Jill Guthrie welcoming everyone to the Annual General Meeting.

The evening opened with a warm welcome from Board Co-Chair, Jill Guthrie. After the approval of the 2021 Annual General Meeting (AGM) minutes, Venus Duplin from RHN Chartered Professional Accountants provided the auditor's report. Seva Canada's net assets at the end of the fiscal year ending June 30, 2022 were $1,342,794. Seva's audited financial statements were approved and RHN was then appointed as our auditor for another year. 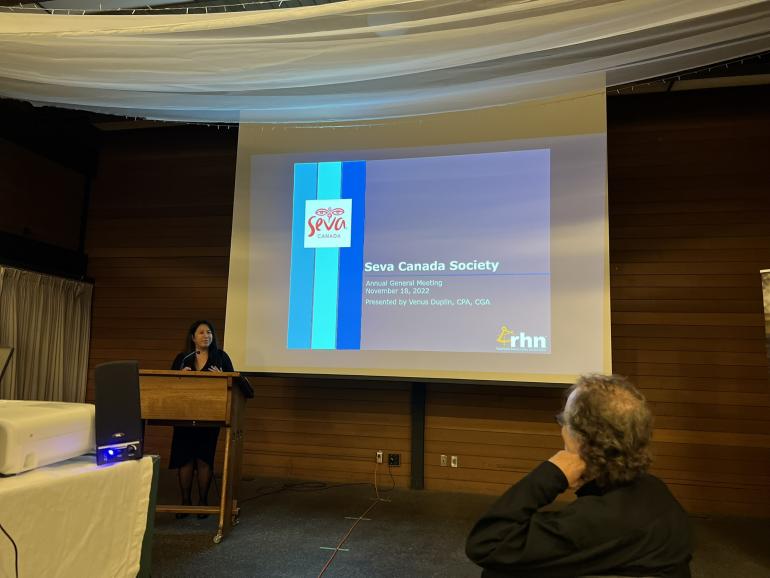 Board elections followed with the following Board Members re-elected for another term:

Three new volunteers were elected to the board! Welcome Brigid Cakouros, Maggie Edwards and Sanil Joseph. We then bid a fond farewell to retiring Board Member Sashipriya Karumanchi and thanked her for her seva (selfless service).

"“It’s all done with people” is a refrain often repeated over our 40-year history. I heard it in my first meeting with Seva Canada Board members and staff in 2005 when I started as a volunteer.  It’s more than a saying; it is the backbone of Seva Canada’s success." - Penny 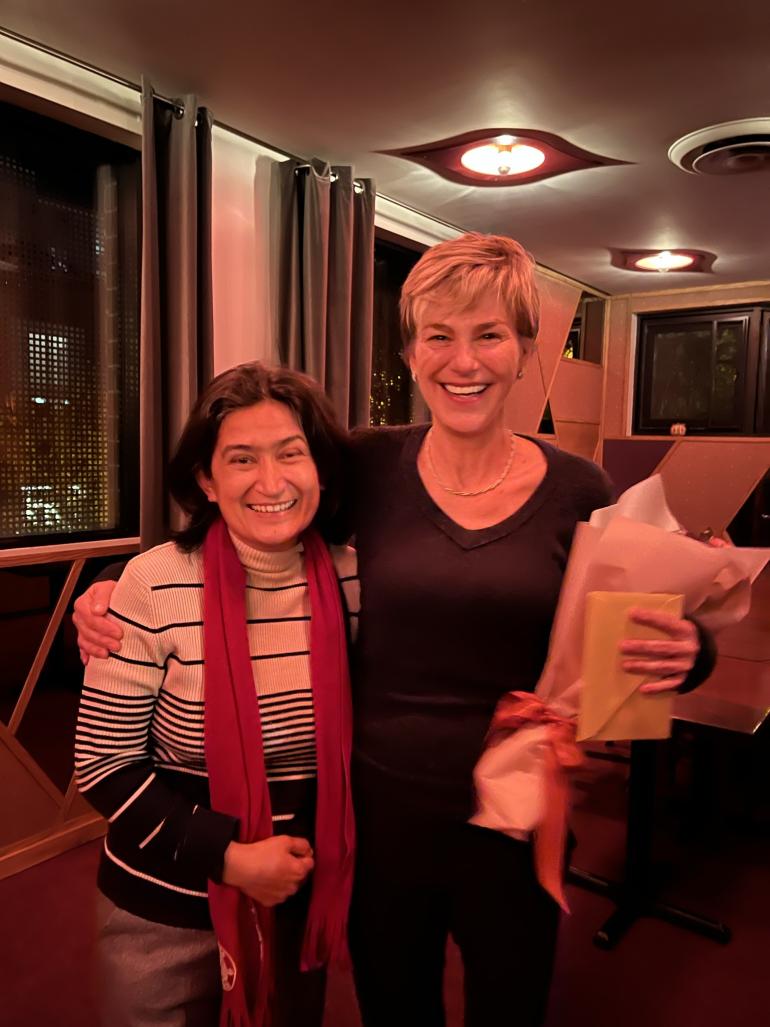 Penny also introduced some new staff members - Ashley Holm, our new Operations Manager and Katie Judson our new Program Manager. And lastly, Penny, after 16 years of leading Seva Canada, announced that as of January 1, 2023 she will be stepping down as Executive Director and Liz Brant will be taking on the role.

"My 16 years of service to Seva, beside our dedicated partners and my fabulous staff, has been an honour and a privilege and I am forever grateful for the opportunity." - Penny

Liz was previously the Development Director for Seva Canada before she left, got her MBA and worked as the Director, Department of Obstetrics & Gynecology at BC Women's Hospital and Health Centre. But just like the Hotel California, you can never quite leave Seva Canada! 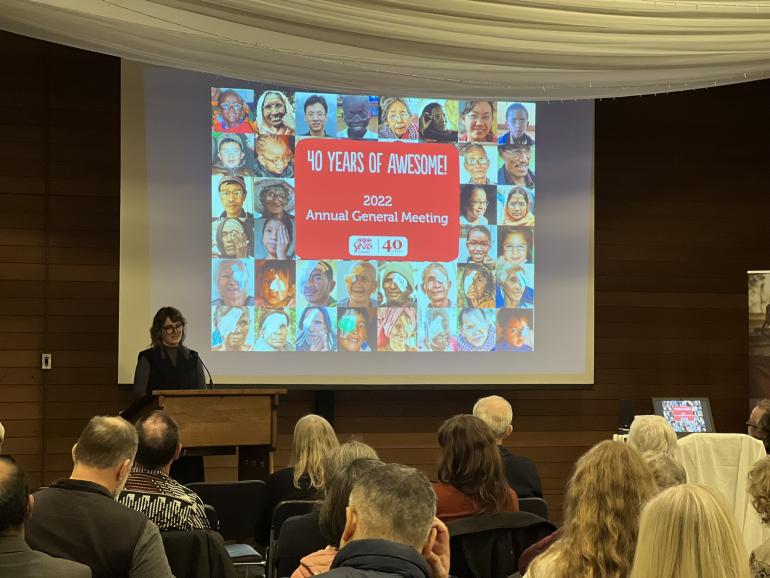 Liz Brant speaking at the AGM

Liz then took to the stage to acknowledge what a dynamic leader Penny is and all that she accomplished for the organization. And, how pursuing development with dignity, was not only a cornerstone of how Seva works but also how it is a driving force for Penny leadership style. She embodies the same trust, respect, and mission-driven approach to her work with the program partners, staff, patients and donors.

"Having worked with Penny for 4 years I know as well as anyone that these are big shoes to fill. What I can say is this: I intend for the principle of trust and respect to also guide the way I work with Seva’s incredible staff, board, program partners, volunteers and donors." - Liz Brant

Liz continued by sharing a bit about herself, her passions (organizational strategy) and her recent role at BC Women's Hospital during the pandemic, a "crash course in leadership under difficult conditions!" When Liz isn't working you can find her spending time with her husband, Aaron and their 18-month-old daughter and 5-year-old son or as she puts it, her "joyful little agents of chaos!" Click on this link to read Liz's full speech.

And last but definitely not least, Dr. Marty Spencer, Board Co-Chair, took to the stage to thank Penny for her outstanding contribution to Seva Canada. 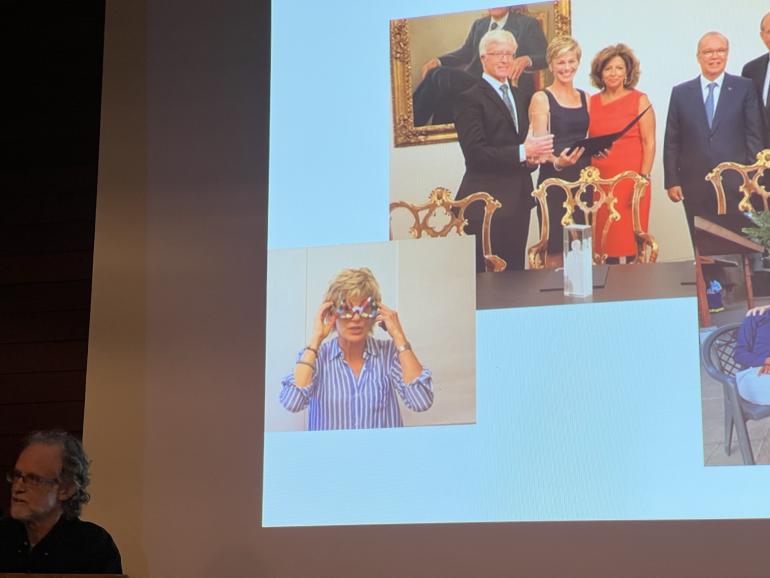 Dr. Marty Spencer, Board Co-chair, thanking Penny for her 16 years of dedication and service to Seva Canada and its mission.

Parami Dhakhwa, Seva Nepal Program Managers, Sunil Joseph, new Seva Canada Board Member and Senior Faculty & Hospital Management Consultant at the Lions Aravind Institute of Community Ophthalmology (LAICO), Aravind Eye Care System, our partner in India and Paul Courtright, Board Member and Co-founder of our partner in Africa, the Kilimanjaro Centre for Community Ophthalmology, took the stage to take questions from Penny and the audience. Here's just a sample of the conversation that took place!

Q. Paul, why were you in Korea and how did that start your path to partnering with Seva?

Paul: I was doing leprosy work in Korea and at that time I was fascinated by the eye pathology of my leprosy patients. I was living in a small resettlement village. And so that put me on the pathway to wanting to understand eye diseases more but what I recognized pretty early on was that my interests were more in the area of public health and epidemiology. Then in terms of clinical management of these conditions, I was not going to be a surgeon and I had very little interest in that. So that led me to do a master's and a doctorate in epidemiology. And because I had spent a number of years growing up overseas and then in Korea, I knew that my future work, if any way I could make it happen, it was going to happen outside of North America.

Q: Sanil, what has been your most surprising encounter while conducting research?

Sanil:  I did a multi -year survey visiting households where on the second series of visits the number of household members had dropped by 2 or 3 or 4 members who had simply disappeared and were not at the addresses they had been at a year prior - which on it's face risks the validity and statistical relevance of the entire study's data itself. Upon invesigtion it was simply that many young people had left the small village for work or other opportunities, which was in itself an interesting learning (and a relief)!

Q: Paul why is Seva Canada your partner of choice?

Paul: Seva Canada enables and supports solutions and networks from within the communities themselves, rather than imposing solutions or making temporary efforts without leaving local personnel more able to continue the work.

Q. Parami, what is the greatest challenge in your role?

Parami: People! for eye care to be successful we need not only the medical professionals, we need managers, we need service staff, we need facilities and physical locations to perform the care and to manage equipment and supplies. We need local partners to seek out and invite and deliver care to those who will not seek it out or cannot do so alone.

Following the panel, Marty, who has been with Seva practically since its inception as a volunteer training our partners in cataract surgery and as a Board Member, took the stage again to share more about our theme of "40 Years of Awesome!"

"From the outset Seva broke the mold of the traditional charitable model. The first step was to find local partners with energy and skill to do the work, because, as Penny reminded us, “it’s all done with people”. - Marty Spencer

From Seva's origin story to the organization's goal of creating sustainable eye care programs by the community for the community and ensuring the very poor, living in remote, rural areas of low-income countries, recieved high-quality services. Marty discussed how Seva Canada played a vital role in the establishment of Aurolab with Aravind Eye Care Systems, our partner in India. Aurolab, a factory that creates intraocular lenses (IOLs) used in cataract surgery, was able to reduce the price of this consumable from  $250 to less than $5 revolutionizing eye care delivery in low-income countries and making them accessible to everyone, even the very poor. He also discussed Seva's innovative payment model whereby those who can pay for eye care subsidize the services for the poor, ensuring that everyone has access to quality care.

Marty also highlighted how operational research conducted by Seva and taught to our program partners, separates our organization from our competitors. It was this kind of research conducted by Seva that discovered that it is caratact not infectious diseases like trachoma that is responsible for the vast majority of treatable blindess. Seva Canada along with the Kilimanjaro Centre for Community Ophthalmology, were also the pioneers of gender equity in the treatment of blindness, discovering twenty years ago that women and girls made up 2/3rd of those living with blindness and visual impairment and creating strategies to overcome the barriers they faced accessing care. 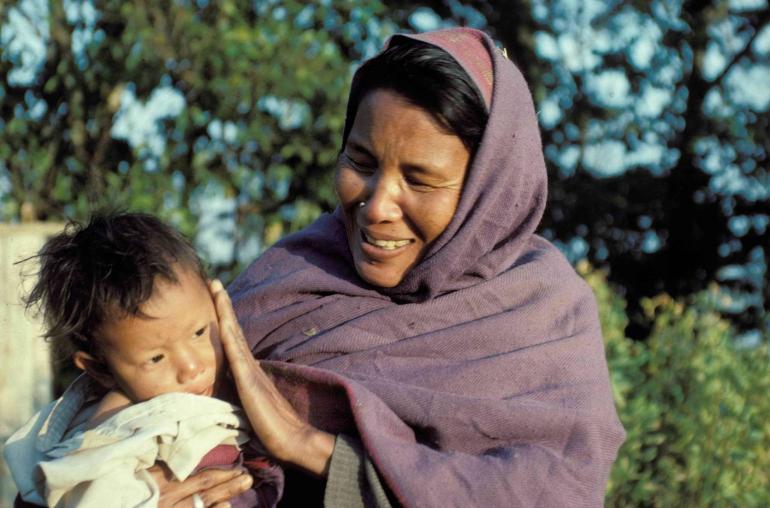 And to end the evening, Marty shared his favourite sight story from his time training our partners overseas. "Many years ago I took part in an eye camp in the foothills of Mt Everest. We trekked in with the necessary supplies and operated on many people from the surrounding area. Among them was a woman who had been blind from cataracts for over two years, able to tell only light from dark. Her husband found out about the eye camp Seva was sponsoring and he walked, leading his wife who was blind and their two children, for ten days to the eye camp. Their youngest child was just under two years old, and the mother had never seen his face. I operated on both her eyes and only after that was told her story. I was able to take these photographs of her and her family. Asked about her feelings, the translator told me she said “you have given me divine eyes.” So when we think about the 5 million people whose sight has been restored though Seva’s work, think about all those individual stories of happiness, all of that awesomeness. And let’s aim for 10 million!"