The cost of vision impairment in Assam, India

The cost of vision impairment in Assam, India

Uncorrected presbyopia, (far-sightedness), a visual disorder that comes inevitably with age, is the world's leading cause of vision impairment, affecting an estimated 1 billion people worldwide, the majority of whom live in low-income countries. The disorder, caused by the natural hardening of the lens of the eye thereby reducing its ability to change shape to focus on close-up images, is easily corrected by a pair of reading glasses costing as little as $1.50. 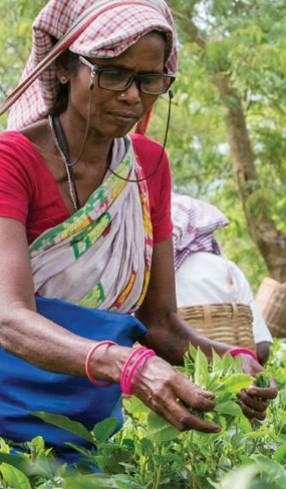 In low-income countries, women and men work in labour-intensive industries well into old age to support their families, yet many have limited access to basic eye care services. The cost of uncorrected presbyopia in terms of lost productivity has been estimated at $14 billion USD annually, yet no randomized control trials, the gold standard for evaluating the effectiveness of interventions, have demonstrated the impact of improved eyesight on productivity and income.

Priya Adhisesha Reddy, a long-time partner of Seva, led a trial to prove that a simple pair of glasses is a cost-effective and easy way to boost household income and business performance in low-income communities. The trial took place in tea estates in Assam, India over a three-month period and involved 751 female tea pickers over the age of 40. The women were randomly assigned to intervention and control groups, where glasses were provided at the start and end of the study, respectively. After the three-month period, women who were given glasses at the start of the study had nearly a 5-kilogram increase (from 26 kg to 30.6 kg) in the daily weight of tea picked or a 21.7% increase in productivity.

In addition to being the highest increase in productivity compared to every other health intervention in low- and middle-income countries studied to date, the results directly link improved vision to increased economic productivity and, with it, the opportunity to transform lives.