A Father's Blessing For Sight

Ram always took care of his family and made sure they had food, clothing and shelter even during the toughest times. Then he got older and life got even harder. Ram is 71 years old and lives with his wife in Khandbari, a remote district in Nepal. They have a small plot of land for farming and a few goats for milk to sustain themselves. Their two married daughters are busy raising their children in nearby villages.

When Ram was young, he went blind in his right eye due to a traumatic injury. He managed to farm and care for his family with the sight in his remaining good eye. Unfortunately, four years ago, the sight in his left eye slowly began to deteriorate until he was completely blind in both eyes. He was no longer able to farm or care for his animals. He lost his independence and was completely dependent on his wife. She did her best to care for him and their household but it wasn’t enough. They had to rely on their daughters to provide rice and clothing to survive.

Ram was overwhelmed with guilt, he felt his blindness was a heavy burden on his family.

Fortunately, his daughter learned about an upcoming eye camp on the radio. She brought her father to the eye camp with the hope that his sight, at least in one eye, could be restored. At the eye camp, Ram was diagnosed with corneal scarring on his right eye that could not be repaired and a mature cataract in his “good” eye. Thanks to a $50 donation by a Seva Canada donor, just like you, Ram received sight-restoring cataract surgery, free of charge. 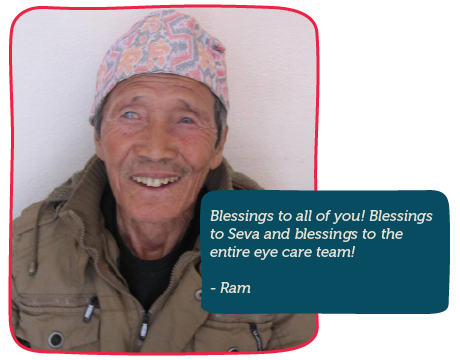 The next day, when Ram’s bandage was removed and he realized he could see with his left eye, he was overwhelmed with happiness. He could not stop smiling and blessing everyone who had helped him!

Give the gift of sight in honour of the father's in your life!