A Future in Focus

Rinku is a 14-year-old high school student who lives in the Bara district of Nepal with her parents. Her family are wheat farmers and struggle to earn enough to meet their basic needs.

Rinku loves going to school and is an excellent student, but two years ago, school became difficult. That’s because Rinku struggled to see the blackboard and had to bring her textbooks up close to her face to read. She became withdrawn and isolated herself from her peers as she fell behind in class. Rinku’s parents noticed her waning enthusiasm towards school and became worried about her future and her ability to succeed in class.

Thankfully, a Seva-sponsored eye screening was conducted at Rinku’s high school and her vision was tested. She was then referred to a nearby Community Eye Centre (CEC) for further examination, where she was diagnosed with refractive error and given a pair of prescription glasses free of charge. Glasses her family would never have been able to afford without the generosity of Seva Canada donors. 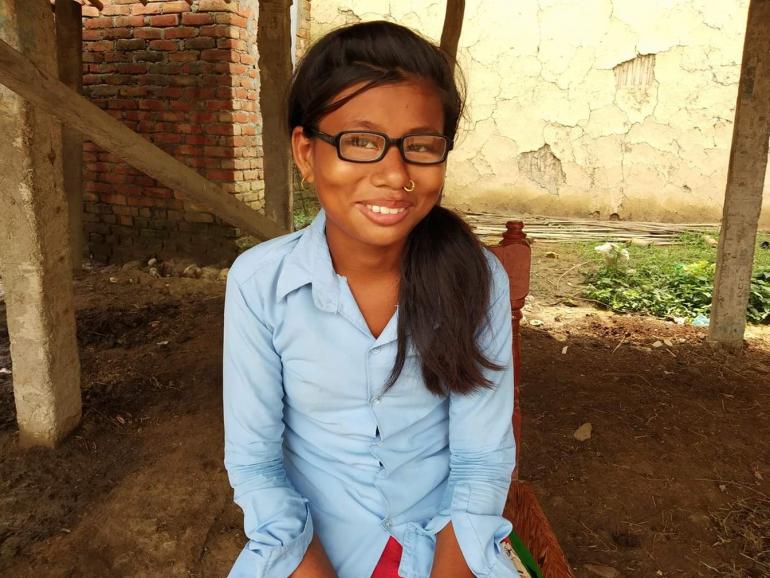 Rinku was so excited and happy to see again and she repeatedly thanked the eye care team. A week later, Rinku and her parents travelled to the CEC to express their gratitude to the staff for restoring their daughter’s sight and their family’s hope for the future.

When the eye care team returned to Rinku’s high school to do a follow-up, they found an animated Rinku wearing her glasses and surrounded by friends.

On behalf of the many girls like Rinku who have been given the power of sight through the generosity of Seva Canada donors, thank you for helping girls see and succeed.

HELP 2000 KIDS JUST LIKE RINKU GET A NEW PAIR OF GLASSES!