Recycling Eyeglasses Is a Feel-Good Waste of Money

Originaly Published on BloombergView, May 3 2012 by Virginia Postrel.

May 4 (Bloomberg) - One of the public libraries I use regularly has a box where people can donate their old eyeglasses. Whenever I see it, I regret having nothing to contribute. That’s because I’ve let my personal experience trump my economic good sense.

I have a special appreciation for just how valuable glasses can be when you can’t see.

I spent the third-grade borrowing glasses from the girls who sat on either side of me. The ophthalmologist had advised my parents to wait to get me glasses because my eyes were bound to change and they’d just have to buy a second pair. (We were not poor -- my father was an engineer -- but the doctor was a paternalist of the old school.) By the time I got my first pair of glasses, the only thing I could read on the eye chart was the big E.

I’ve long since had my myopia surgically corrected -- the proverbial miracle of modern medicine -- and now stash cheap over-the-counter reading glasses in every room of my house. Still, I remember what it was like to need glasses and not be able to get them. So I sympathize with charities that collect eyeglasses to distribute to people who can’t otherwise afford them.

But such efforts turn out to be a terrible waste, for reasons that are completely logical once you think about them. The case of recycled eyeglasses illustrates how easy it is to fool ourselves when we think about thrift, waste and charity. We overestimate the importance of the physical things we can see and forget about the real costs of time and attention, as well as the importance of intangible values like aesthetics to the people we’re trying to help.

In a paper published in March in the journal Optometry and Vision Science, four researchers compare the full costs of delivering used glasses to the costs of instead delivering ready-made glasses in standard powers (like my drugstore readers, but for myopia as well). The authors find that recycled glasses cost nearly twice as much per usable pair.

The costs of ready-made glasses are pretty straightforward.

You have to buy the glasses from the manufacturer, get them to wherever they need to go and fit each person with the right pair. Because you can generally rely on the manufacturer to accurately specify the power of each lens, especially for lower-powered lenses, most pairs require only a quick visual inspection before they can be used.

The price of the physical glasses is minor -- only $1.88 for a new pair of ready-made spectacles. Most of the costs of delivering them go for labor and travel expenses to, for example, bring a team of optometrists and opticians from Australia to Cambodia.

Using labor costs based on wage rates in Australia, where the research was done, the cost of delivering a pair of ready-made glasses is $11.28 (in U.S. dollars) for lower powers requiring only a visual inspection and $13.23 if the lens power is checked with a focimeter, a tabletop instrument that looks something like a microscope. (These costs do not include an exam to determine the prescription.)

Using ready-made spectacles, a charity can, at a relatively modest cost, buy and stock a full range of prescriptions in frame styles for men or women, making it likely that anyone who needs glasses can get an appropriate pair.

Now think about that library collection box. People with all sorts of prescriptions donate their old glasses. Some of the lenses are scratched. Some of the hinges are broken. Some of the plastic is old and brittle. Many pairs have progressive lenses or are bifocals, which are hard to fit. The selection is, in short, a hodgepodge -- of condition, prescription and style.

The glasses get packed up and sent to their destination where, unlike the ready-made glasses, they need to be sorted. First, someone has to go through and throw out all the pairs that are completely unusable, either because they’re in poor condition or because they have progressive lenses that are too customized to be practical for new users. Then someone has to test each remaining pair using a focimeter to determine the prescription. Pairs whose lenses have different powers or are designed to correct significant astigmatism also get discarded at this stage. They, too, are unlikely to match a new wearer.

The researchers ran two real batches of donated spectacles through this process, checking a total of 275 pairs. A mere 23 percent of the recycled glasses passed the quick first check, and only 7 percent of the donations survived the full process. To get a single pair of usable glasses, in other words, required 15 donated pairs.

All told, in the first batch of 106 pairs, only nine were usable, including two sets of bifocals, which are less useful than single-lens glasses. In the second batch, only 11 survived. All of the usable glasses had at least minor damage.

“Because most donated spectacles proved to be unusable,” the authors write, “this effectively meant that the donor organization had packaged and posted, at some considerable expense, spectacles destined to be discarded.” In other words, well-meaning charities were wrapping up garbage and sending it through the mail.

Because recycled glasses require more labor-intensive screening and have such a high rejection rate, each surviving pair winds up costing a lot more than a ready-made pair: $20.49 for the 7 percent survival rate and $17.86 at a more optimistic 11 percent rate.

But that’s a deliberate underestimate. It costs $78 to ship 100 pairs of recycled spectacles to their destination, so the calculation charged each pair with 78 cents of shipping costs.

“We decided, somewhat generously, to only allocate the cost of transporting each pair (whether it was usable or not) in the costing of recycled specs,” explains lead author David A. Wilson, the Asia-Pacific research manager for the International Centre for Eyecare Education, in an e-mail. But only seven out of every 100 pairs were usable, so the real shipping cost per useable pair wasn’t 78 cents. It was $78 divided by seven, or $11.14 -- about as much as the total cost of delivering a pair of ready-made glasses.

“By being ‘generous’ in only counting $0.78 toward the shipping cost for recycled spectacles we have created bias in favor of recycled glasses while still finding them to cost more,” says co-author Kevin Frick, a professor of health policy and management at the Johns Hopkins Bloomberg School of Public Health. “This approach makes us more comfortable with the robustness of our conclusion.”

Cost calculations tell only part of the story. They assume that each surviving pair of recycled glasses will eventually reach someone who needs and wants it: that the prescription will match, the frames will fit, and the style won’t be so inappropriate that the recipient is embarrassed. Having a random selection of prescriptions makes that more difficult. And imagine how a dignified older man would respond to a donated pair of purple “Pixie” glasses with sparkling crystals. Even poor people tend not to wear glasses that make them feel ugly or ridiculous.

Recycling old glasses makes people feel generous and thrifty. They believe they’re helping people and saving money. They think the glasses they donate are “free,” because they don’t consider all the hidden costs of sorting and shipping them. And they don’t realize just how cheap manufacturing new glasses has become. If they really wanted to help people see, they’d send money. Unlike leftovers, it’s guaranteed to fit.

(Virginia Postrel is a Bloomberg View columnist. She is the author of “The Future and Its Enemies” and “The Substance of Style,” and is writing a book on glamour. The opinions expressed are her own.)

To contact the writer of this article: Virginia Postrel in Los Angeles at vp@dynamist.com.

To contact the editor responsible for this article: Tobin Harshaw at tharshaw@bloomberg.net.

For more information on why Seva Canada does not accept used eyeglasses email admin@seva.ca 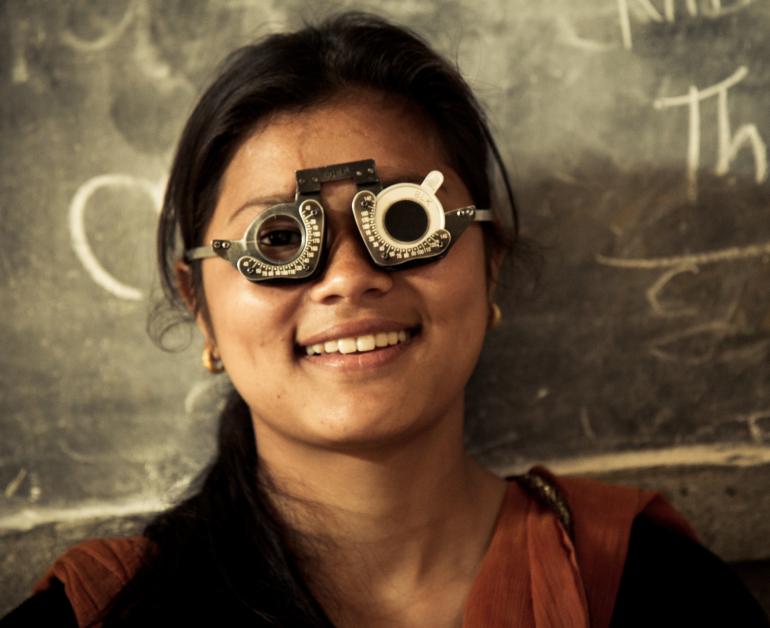