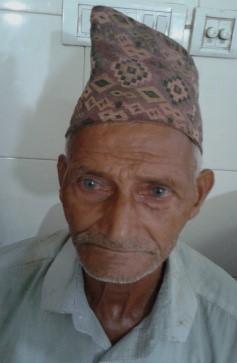 After 25 years of service, Bir Bhan Nath retired from the Indian Army and moved to a village in far western Nepal to live with his only son and daughter-in-law and their two children. He planned to spend his retirement farming to help support his family. Bir Bhan’s son moved to Oman for a job and left his family in the care of his wife and father. Now 72 years old, Bir Bhan was the only person helping his daughter-in-law work in the fields and care for the cattle.

Unfortunately, Bir Bhan’s vision began to fail and he was forced to loan his land to his neighbour for a 50% share. He could no longer recognize his cattle and could barely manage walking alone. His son was unable to return home, so his daughter-in-law took him on foot and by bus to the Mahendra Nagar Eye Hospital for treatment. After examination by the ophthalmologist, he was diagnosed with glaucoma and cataract in both eyes.

Glaucoma, a chronic and potentially blinding condition, requires lifelong treatment and care by a specialist.

The hospital referred Bir Bhan to Geta Eye Hospital to treat his symptoms and create an ongoing glaucoma management plan.

At Geta, Bir Bhan received glaucoma and cataract surgery on both eyes to restore his sight. He was thrilled to see again and expressed his immense gratitude to the hospital and surgeon. Now Bir Bhan can again help his daughter-in-law in the fields and with his grandchildren.

Having experienced blindness, Bir Bhan knows the importance of continuing his glaucoma treatment and will return to the hospital regularly to meet with the specialist for ongoing treatment to safeguard his vision.

You can help someone just like Bir Bhan get the glaucoma treatment they need for just $75.

Glaucoma can cause vision loss and blindness, which can’t be reversed. Glaucoma causes fluid to build up in your eye, causing pressure that can damage the optic nerve, which transfers visual images to your brain. But, you can save your vision with early detection and treatment.

There are no early symptoms. Glaucoma often has no early warning signs. No pain. No discomfort. No blurry vision. Only advanced glaucoma will affect your vision.